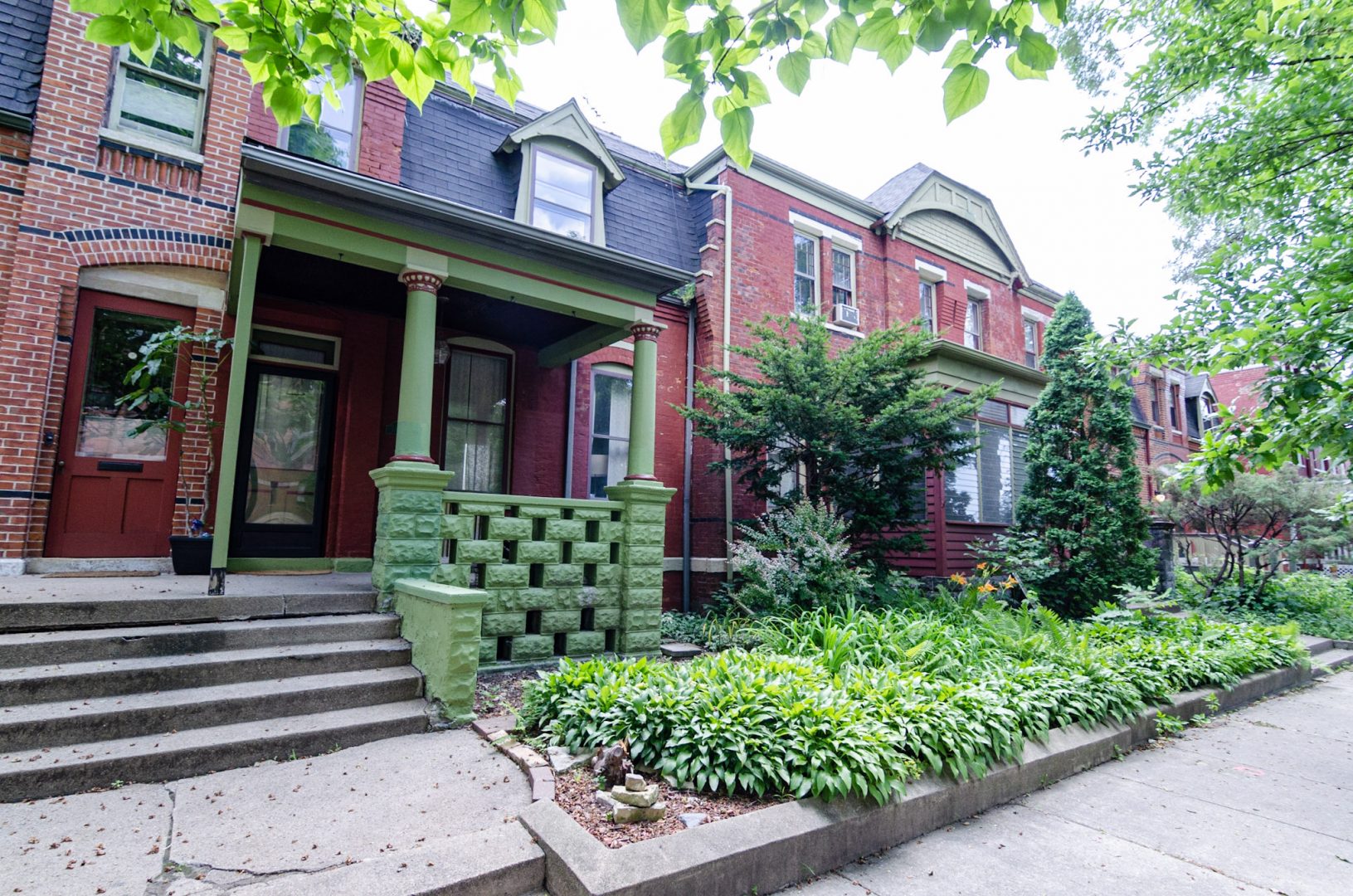 To create opportunities for all people to experience and understand the continuing American story that is Pullman.

We live our mission by performing three interrelated roles:

HPF was chartered in 1973 as an Illinois nonprofit corporation with 501(c)3 tax status. Since then we have:

Our founding was the natural outgrowth of efforts initiated by the Pullman Civic Organization and its Beman Committee. Pullman residents and other interested individuals developed a growing awareness that Pullman’s historic significance and unique architecture needed to be preserved and protected. Through their efforts, the Town of Pullman was designated an Illinois Historic District in 1969 and a National Landmark District in 1970. In 1972, the southern part of the District became one of the first landmark districts created by the City of Chicago. More recently the City of Chicago amended the historic district boundaries to include both the north and southern parts of the district.

To achieve stronger unity and to better coordinate and leverage the community’s historic and cultural assets, the Friends of the Pullman State Historic Site combined with HPF in June 2021.

The Friends of the Pullman State Historic Site group was formed in 2014 to support education and development activities at State properties in Pullman, including the Hotel Florence and major portions of the Pullman factory site. Among many other achievements, the group worked with the State of Illinois to significantly enhance an existing Pullman history website. Together, they developed the database at www.pullman-museum.org. This site includes the Pullman House Project—consisting of more than 41,000 records, such as the 1883 and 1889 city directories, and the 1900-1940 censuses—and more than 9,200 additional documents and images.

With the help of our supporters and partners, valuable artifacts and archives are being preserved. The Hotel Florence and Market Hall survived the threat of demolition. And we have welcomed thousands of visitors from all over the world to Pullman each year—a testament to the importance of Pullman’s place in history.

HPF is governed by a Board of Directors, managed by a small professional staff and supported by volunteers. We also benefit from the strategic guidance and support of our Advisory Council consisting of civic, business, cultural and community leaders.

HPF maintains business records at our business offices, 614 E. 113th St., Chicago, IL 60628. Copies of annual 990 tax filings are on file and can be viewed through the website of the Attorney General of Illinois: http://www.illinoisattorneygeneral.gov/charities/index.html

Joe’s experience spans over 40 years in government and transportation, including serving as Chief Executive at the local, state and federal level. He was appointed by President Obama in 2009 as the twelfth Federal Railroad Administrator of the United States; served as Mayor of Riverdale, Illinois; was State Director in Illinois for the United Transportation Union; and Executive Director, Chicago Metropolitan Agency for Planning (CMAP). Retired from CMAP in 2019, Joe brings a wealth of planning and rail transportation expertise to the Board.

Raised in Chicago, Laura spent her first 40 years in Pullman. She began her professional career in Customer Service for what was then Illinois Bell. She went on to spend 33 years with Verizon Communications managing key departments and advancing to Sr. Manager of Pricing & Contract Management Operations for Verizon’s Business unit. Since retiring in 2019, she continues to be a strong preservation advocate and supporter of the Pullman community.

Doug is the Director of Arbitration for the National Division of the Brotherhood of Locomotive Engineers & Trainmen, and Chairman of the first Division of the National Railroad Adjustment Board headquartered in Chicago. An avid photographer, Doug has documented the Chicago railroad scene for nearly 50 years. He has a profound interest in Chicago, railroad history, labor history and everything Pullman.

Executive Assistant, Administrative Hearings for the Illinois Secretary of State for 42 years, Cindy has served on the Board since 1986 as President, Vice President, and Treasurer; and she co-chaired the popular Historic Pullman House Tour for 30 years. Born and raised in Pullman, Cindy’s roots go back to 1928 when her grandparents migrated here, and her strong commitment and dedication to the community is ongoing

Fred has 30 years of commercial banking experience for large museums, cultural institutions, and universities including the Art Institute of Chicago, Chicago Field Museum and Chicago State University. Past Treasurer of the Illinois Railway Museum, Chicago Chapter of Railroad & Locomotive Historical Society and Twentieth Century Railroad Club, Fred has written over 40 articles on railroad history and is Co-Founder of the Illinois Central Historical Society.

Born and raised in Pullman in the home his grandfather built in the 1920’s, Jim’s career began with real estate developer Arthur Rubloff. By age 25, he successfully built and operated two retail stores in the Evergreen Plaza Shopping Center and one in River Oaks Shopping Center until 2010. Since retiring, he has purchased and renovated many Pullman homes, and in addition to serving on the Board since 2014, his volunteer efforts touch every area of the community.

President of Chicago Neighborhood Initiatives (CNI) for 25 years, Dave has served neighborhoods throughout Chicago in various nonprofit and governmental capacities, including North Lawndale community organizer and Superintendent of the Chicago Park District. His capital raising expertise led efforts to have Pullman declared a National Monument. He also serves on the Millennium Reserve Steering Committee and the Cook County Commission on Social Innovation.

Maria is Co-Founder and Founding Executive Director of the Chicago Learning Exchange, a leading non-profit promoting educational innovation and equity of opportunity for young people in Chicago; and was Executive Director of three civic collaboratives at the Chicago Community Trust. A George M. Pullman scholarship recipient, she brings a wealth of leadership experience, philanthropic connections, communications skills, and community building to the Board.

Now retired, Craig was Program Director at the MacArthur Foundation, VP & Co-Director of the Low-Wage Worker & Communities Unit of MDRC and former Program Officer at the Ford Foundation. These and other major leadership positions make Craig a valuable addition to the Board. A South Sider whose father was a Chicago policer officer in Pullman’s 5th District, he has a strong connection to the community and to Pullman.

The Deputy Village Administrator for the Village of South Holland, Illinois, the first to be appointed to this position, Patricia manages the day-to-day operations of the Village of 22,000 residents and a $40 million dollar annual budget. A Juris Doctor from De Paul University’s College of Law, Pat has served on several Boards, including the Victor C. Neumann Assoc., a not-for-profit organization, Diversity, Inc., an organization that fosters diverse residential environments; and she was a former Chair of the Metra Citizens Advisory Board. Patricia has received numerous community service awards, including Cook County’s Peggy A. Montes Unsung Heroine Award.

A Pullman resident, Nathaniel is currently the Director of the Art Institute of Chicago Archives, managing all archival programs, collections and services for the museum. He’s curated or collaborated on a number of Ryerson and Burnham Libraries exhibitions, including “Reconstructing Adler & Sullivan’s Stock Exchange Trading Room” and “Architecture for Urbanism: Selections from the Bertrand Goldberg Archive.” With a Master’s of Library & Information Science from Simmons College and a quarter-century in the field, Nathaniel brings valuable archival and collections expertise to the Board. Nathaniel enjoys working on his 1880 Skilled Craftsman rowhouse which he shares with his wife, their two cats and his vinyl record obsession.

Kathy has over 37 years of professional service, including 16 years with the National Park, for a total of 29 years Federal Service. Kathy was named first Superintendent of the Pullman National Monument in 2016. As Superintendent, she directed the development of this new National Park Service site and led the planning for the $35 million rehabilitation project of Pullman’s Administration Clock Tower for the Park visitor center.

Retired architect and AIA Emeritus, Mike has over 40 years of experience in urban planning. Project Architect/Urban Planner for McDonough Associates, where he led land development projects for commercial, institutional and urban transit projects for the Lakefront, Millennium Park, Chicago Transit Authority and Forest Preserves of Cook County. He is a founding member and past president of the Historic Pullman Foundation, and Vice President of the Dunes National Park Association. A Pullman resident for over 50 years, he has devoted a majority of his time to preserving Pullman’s history.

With over 35 years of banking experience, Eric is Vice President Regional Manager for Beverly Bank and Trust, providing leadership to develop strong community partnerships. In addition to the Historic Pullman Foundation, he serves on the Roseland Community Hospital Foundation Advisory Board, the Metropolitan Family Service Calumet Office Community Board, the Ray & Joan Kroc Community Center Advisory Board, among others. He has received many awards for community service, which is evident in his continuing commitment to Pullman.

Vice President of Economic Development of Chicago Community Loan Fund, Maurice has over 32 years of experience in community and economic development. His expertise has led to construction of $527 million and 2.6 million sq. feet of retail and industrial centers throughout Chicagoland, including Pullman, and has completed more than 250 projects ranging from affordable housing to hospitals and institutional facilities.

Norm Carlson, Past Chairman of Metra Board and rail historian